For those new to the Dirichlet distribution, how its parameters affect the prior probability assigned to each categorical event (i.e. each dimension) is not always intuitive. This can serve as an obstacle to assigning sensible Dirichlet priors during Bayesian modeling. While some rules of thumb apply based on known properties of the Dirichlet and knowledge of Beta distributions can produce reasonable starting points for prior specification, simulation and visualization can greatly aid in prior selection.

Two different types of visualization are often useful in specifying Dirichlet priors. The first is a multi-dimensional visualization of the probability density across the event space. This is the most common approach to visually communicating information about the distribution of the joint probabilities of each event. For example, leveraging the fact that each vector is constrained via a simplex, most tools allow users to visualize how the probabilities of each event varies across different parameters of a $Dirichlet_{K=3}(\alpha)$ using a triangular heat map. This approach helps provide a rough sense of how prior probability shifts between each event with different Dirichlet distributions. However, the triangle ceases to be able to summarize the densities as the dimensionality of the Dirichlet distribution increases - making visualization and interpretation difficult-to-impossible for high-dimensional distributions.

As I did not find a simple tool for this latter type of visualization, I put one together. You can find the tool here. 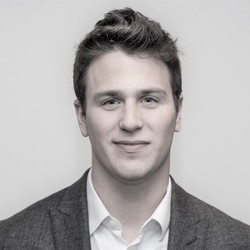